A bright, stylishly modern two-bedroom apartment (sleeps 1–6) in a waterfront warehouse conversion in Leith. This is a quiet, peaceful apartment that's convenient for all that Leith has to offer and well placed for transport connections to central Edinburgh. 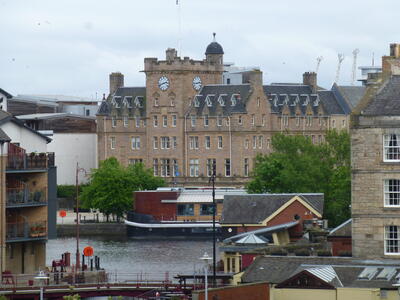 This corner apartment is on the third-floor of a stylish warehouse conversion in a waterfront development. Overlooking the old docks, it is well served by transport and is close to Leith's vibrant restaurant scene. The apartment is quiet and peaceful. It has an entryphone system, internal elevator and private parking for one car. The apartment is furnished to a high standard with a comfortable living room with windows on two sides (one of which has a window seat looking out towards the Shore area across the Water of Leith), a fully equipped galley kitchen, a separate dining room (with seating for six), two bedrooms (one double with large en-suite shower room, one twin bedded), bathroom and central heating. The double bedroom has a king-size double bed. The bathroom is off the hallway and has a bathtub (no shower) and WC. The living room has a three-seater sofa (which converts into a bed), a two-seater sofa, and an easy chair.

The corner of Commercial Street and The Shore 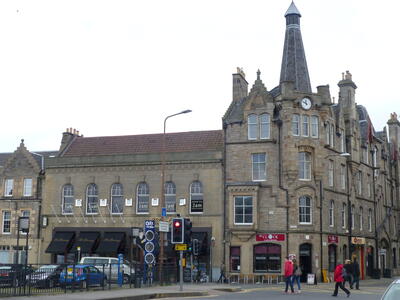 Located on Edinburgh’s eastern shore, the old port of Leith is only a 15 to 20 minute bus journey from the city centre. In recent years, Leith has become one Edinburgh’s most vibrant areas, but has retained its traditional character as a working port. Like many waterfront developments, Leith has become a desirable place to live, and the influx of young people has created a trendy shopping and nightlife scene. There are dozens of cafes, pubs and restaurants within a few minutes' walk of the apartment, which come in to their own in the summer, when they spill out in to the streets; you can even eat and drink al fresco. Ocean Terminal shopping centre, a 5-minute walk away, is home to many fashionable shops and eating places and has a multiscreen cinema, Vue; moored alongside is the Royal Yacht Britannia. Nearby Bernard Street and The Shore have several useful shops, including a small supermarket, a wholefood shop and gift shops. Leith is renowned for its fish and seafood restaurants and also has a tantalizing choice of Italian, French, Scottish, Indian, Chinese, and Turkish restaurants, as well as Michelin-starred establishments (The Kitchin, and Martin Wishart). You can walk to Edinburgh city centre in about 25 minutes or just hop on one of the buses that stop opposite the apartment (buses run 24 hours a day). Leith is ideal for a night out after a busy day sight-seeing in Edinburgh.

Leith is the port of Edinburgh and was once a separate town until in 1920 a hastily organized local referendum (the so-called 'Arranged Marriage', with Leith the reluctant bride) brought Leith under the administrative rule of its neighbour. Colourful Leith Walk is the long avenue that links Edinburgh and Leith. Leith Walk is the umbrella name for a series of differently named streets and terraces. Foodie delicatessens rub shoulders with greasy-spoon cafés, and you can go from Italy to China in the space of a few blocks. On Elm Row at the top of Leith Walk is Valvona & Crolla, one of Britain's top Italian foodshops. The shopfront boasts 'Founded in 1934, Origins in 1860s', and those years of tradition are evident the minute you step inside: hams hang from the ceiling, floor-to-ceiling shelves strain with Mediterranean delicacies and you can often hear Italian being spoken. The shop is still owned and run by descendants of the Crollas and Valvonas who set it up in the 1930s. The shop also has a café, where you can sample the cuisine of Mary Contini, one of Britain's premiere food writers and chefs. The shop plays a role in the Edinburgh Festival each August, when it becomes a venue for Italian music and drama.

The Water of Leith is Edinburgh’s hidden natural asset. Flowing for 24 miles from its source in the Pentland Hills, the river winds its way through the heart of the city to its outflow into the Firth of Forth, meters from the apartment. The river can be explored on foot or bike along the Water of Leith Walkway. On the southern side of Leith is leafy Leith Links, an area of open parkland that is one of the places where golf was first played. Leith Victoria Swim Centre on Great Junction Street has a swimming pool and gym.

The apartment is about a 10-minute bus ride from the tram stop "York Place" (which runs directly from/to Edinburgh Airport) and from the main railway station: Edinburgh Waverley Station. Taxis can be hailed throughout the city centre. We will send you detailed directions before your arrival.

For those arriving by car, there is parking available for one car (on request).