Visiting Perthshire, Angus and Dundee: The heart of Scotland

About Angus and Dundee

Angus is a perfect mix of coast, countryside and city, stretching from the beaches and cliffs of the River Tay and North Sea to the gentle glens reaching up into the Grampian mountains. The main city of Dundee has lots of cultural and historic attractions, complemented by the smaller towns and villages of Angus.

Dundee used to be known as the city of the three Js: jute, jam and journalism. The jute industry made the city one of the most prosperous in the UK in the 19th century (an industry long gone but commemorated in the Verdant Works, a restored jute mill); the publishing empire of DC Thomson is home of the Dandy and the Beano comics among numerous other publications; and Keiller’s marmalade was made in the city.

Dundee is now the City of Discovery. The RRS Discovery, Captain Scott’s Antarctic explorer ship which now sits in Dundee harbour, serves as a figurehead for the new Dundee: a city of wordclass arts (at the Dundee Contemporary Arts Centre; the Victoria and Albert Museum; Duncan of Jordanstone College of Art and Design), groundbreaking research at the University of Dundee (with its renowned School of Medicine) and Abertay University, and a world centre for the design of computer games.

The coastal towns of Broughty Ferry, Carnoustie (with its world-famous golf course) and Monifeith have long been Dundee’s beach resorts and further up the coast the cliffs at Arbroath are a haven for seabirds. Lunan Bay is one of the East Coast’s best beaches.

Some architectural highlights are Glamis Castle, childhood home of the late Queen Elizabeth the Queen Mother, the House of Dun, a William Adam mansion with unique plasterwork, Edzell Castle with its garden, Fasque Castle, seat of the family of Sir John Gladstone, one of Queen Victoria’s Prime Ministers, ancient sites like the Aberlemno sculptured stones and Abernethy round tower.

The county has many renowned fishing rivers, like the Isla and the Esk. 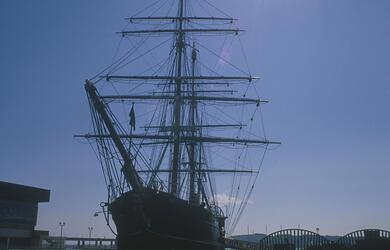 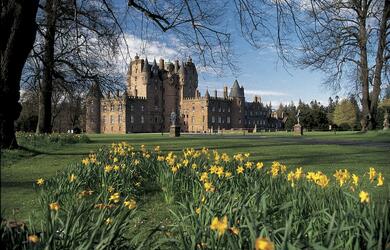 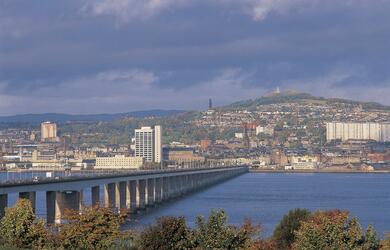