Situated beside Grassmarket, with views to the Castle

A bright, centrally located one-bedroom mews house (sleeps 1–4) in a peaceful location beside the famous Grassmarket, with spectacular views of Edinburgh Castle and within easy walking distance of the major tourist attractions, festival venues, shops, nightlife and transport connections. 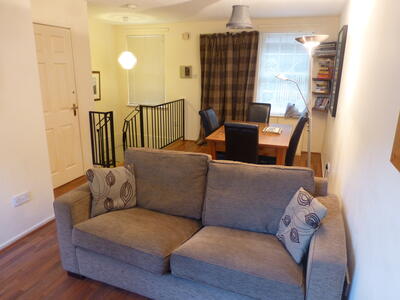 This property is a bright one-bedroom mews house on two floors in a peaceful central location beside the famous Grassmarket, and within easy walking distance of the major tourist attractions, festival venues, shops, nightlife and transport connections.

With windows to the front and back, the spacious living room is full of light and has a stunning view of Edinburgh Castle. There is a comfortable dining area. The three-seater sofa converts in to a double sofabed, and a comfortable armchair, attractive rugs, a TV/DVD and a selection of books and DVDs complete the home comforts. The front door opens on to a sunny shared courtyard. There are about two dozen steps in several small flights from the gated entrance at West Port to reach the front door of the King's Stables house.

A spiral staircase from the dining area leads down to the bedroom and shower-room. The double bedroom is fully carpeted and attractively furnished. The shower-room has a  standard-size power shower (no bathtub), wash-hand basin and toilet.

The modern kitchen is well provided with crockery, cutlery, glasses and kitchenware, as well as a washing machine (there is a clothes horse for drying clothes), fridge-freezer, cooker and microwave.

The house has full central heating; the price of electricity and local taxes is included.

Edinburgh Castle from the Grassmarket 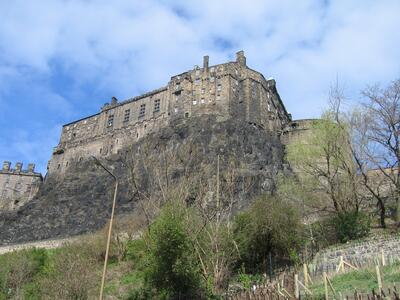 This apartment is an ideal base from which to explore Edinburgh. The Old Town is at your feet: a warren of closes and side streets lead from the Grassmarket to the Royal Mile; while an entrance to Princes Street Gardens from King's Stables Road makes Princes Street and the New Town easily accessible by foot.

The house is situated on King's Stables Lane, a few metres from the Grassmarket, in the heart of Edinburgh's historic Old Town. (The name of the street recalls that this is where the royal stables attached to the castle were situated.)

It's a short walk through the Grassmarket to the Royal Mile, the backbone of medieval Edinburgh, which connects Edinburgh Castle at one end with the Palace of Holyroodhouse and the Parliament at the other. (Royal Mile is the combined name for the street formed by Castlehill, Lawnmarket, High Street and Canongate.) Edinburgh's main visitor attractions are on your doorstep and the neighbourhood is full of attractive independent shops and restaurants, bars and cafés to suit all budgets, from cheap and cheerful pizzerias to fine dining establishments. The Hub (the official centre for the Edinburgh International Festival) and the Festival Fringe office are on the Royal Mile, and you can easily walk to many Festival venues; the Usher Hall, Royal Lyceum Theatre, Traverse Theatre, Filmhouse and Dance Base are all only a few minutes' walk away. You are also ideally placed to enjoy the Christmas and Hogmanay/New Year festivities. Edinburgh Farmers’ Market takes place every Saturday morning only a short stroll from the apartment.

The Grassmarket is one of the best-known areas of the city, with lots of bars, restaurants and independent shops. This used to be the working hub of the city; a bustling place of livestock, noisy workers, inns and stables. There have been markets (including horse and meat markets) since at least the 15th century; the first written record of a market is in 1477. In summer, the place comes alive with pavement cafes and street markets, and it has a lively nightlife scene.

Notoriously the Grassmarket was the site for public executions, a memory reflected in the naming of the Last Drop pub: the name refers both to drops of drink and to the drop from the gallows! The Martyrs Cross in the centre of the Grassmarket commemorates the Covenanters who were hanged here in 1681 for their part in defending Presbyterianism in Scotland. You can find out more about Edinburgh's grisly past on the guided tours that leave from the Royal Mile; see for example Mercat Tours, Witchery Tours and Mary King's Close. In the Vennel to the west of the Grassmarket you can see one of the few remaining sections of the Flodden Wall, a defensive structure built around Edinburgh after the disastrous Battle of Flodden (1513), in which King James IV was killed. The pubs in the Grassmarket were haunts of Roberts Burns (a plaque at the White Horse Inn commemorates his stay during his last visit to Edinburgh in 1791), Sir Walter Scott and many other writers, and you can retrace their steps on one of the Edinburgh Literary Pub Tours, which leave from the Beehive Inn. This is ‘an entertaining, witty and dramatic romp through the life and work of Scotland's great poets and novelists from the early 18th century to the present day.’ Don't miss Victoria Street, one of the most charming streets in the city, with its colourful mix of shops, restaurants, cafés and bars; it curves up from the Grassmarket to George IV Bridge.

For those arriving by car, there is metered parking on Grassmarket and on King's Stables Road, though the maximum parking period is 2 hours. Parking on meters and single-yellow lines is free from 6.30pm to 7.30am; please check on-street signage for exact times of parking restrictions; parking is forbidden at all times on double-yellow lines. Castle Terrace Car Park is a couple of blocks away from the apartment. There is car and pedestrian access from both Castle Terrace and King's Stables Road. The car park is open 24 hours a day, 7 days a week. Click on this website  and you can search for “Edinburgh Castle Terrace”.