Living room with dining area and kitchen behind 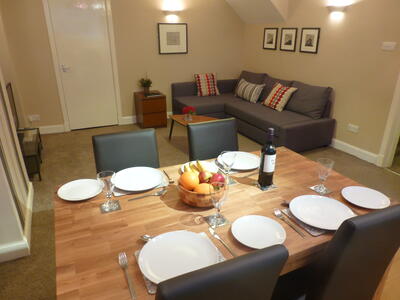 This holiday home is a characterful ground-floor apartment, tucked away in a cul-de-sac just off the Royal Mile. This one bedroom split-level apartment has a double bedroom and bathroom with shower on the upper level and an open-plan living room/kitchen with a double sofabed on the lower level. The bedroom has a king-size double bed and a single bed. The large living room has a kitchen area with large dining table and chairs. The bathroom has a bathtub with a shower over. This is a great retreat in a superb position in the heart of the Old Town.

The modern kitchen is well provided with crockery, cutlery, glasses and kitchenware, as well as a washing machine, fridge, freezer, cooker and microwave. The double bedroom is fully carpeted and has a king-size double bed. For guests requiring an extra sleeping area, a single bed is also available in this room, and the sofa in the living-room converts into a double bed.

The apartment has electric heating. The price of heating/electricity and local taxes is included. For the comfort of future guests, the apartment is non-smoking and pets are not allowed.

The Royal Mile: this is the stretch that's just up towards Edinburgh Castle from St Mary's Street 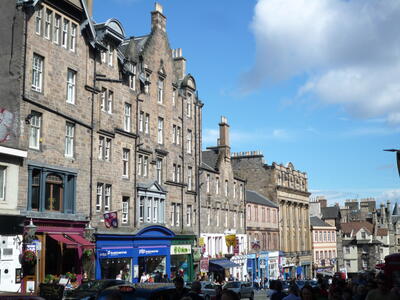 This apartment is situated on Boyd's Entry, off St Mary's Steet, a few metres from the Old Town's main street, the Royal Mile, in the heart of Edinburgh's historic Old Town. St Mary's Street and Jeffrey Street straddle the Royal Mile, the backbone of medieval Edinburgh, which connects Edinburgh Castle at one end with the Palace of Holyroodhouse and the Parliament at the other. Edinburgh's main visitor attractions are on your doorstep and the neighbourhood is full of attractive independent shops and restaurants, bars and cafés to suit all budgets, from cheap and cheerful pizzerias to fine dining establishments. The Hub (the official centre for the Edinburgh International Festival) and the Festival Fringe office are on the Royal Mile, and you can easily walk to many of the Festival venues. You are also ideally placed to enjoy the Christmas and Hogmanay/New Year festivities.

The junction of St Mary's Street and the Royal Mile looks across towards Calton Hill and its monuments: Nelson's Monument (from which a time-ball is lowered every day at 1pm as a time signal to ships out on the Firth of Forth), the Observatory and the National Monument, an unfinished replica of the Parthenon. Initiated by Sir Henry Dundas, 18th century bankroller of Edinburgh's Georgian New Town, to embody the city's reputation as the Athens of the North, the National Monument stands as a reminder of the folly of its patron. Dundas ran out of money and abandoned his ambitious plan; the unfinished building is now irreverently known as Edinburgh's Disgrace. There is also an impressive view of St Andrew’s House, one of the finest Art Deco buildings in Scotland. Built in 1939 by Thomas Tait to house the Scottish Office (the Scottish administration of the central UK government), it is now the main office of the Scottish Executive, the Westminster representation to the devolved government of Scotland.

Royal Mile is the combined name for the street formed by Castlehill, Lawnmarket, High Street and Canongate. The High Street part ends at the junction of St Mary's Street and Jeffrey Street, where the city's eastern gate, Netherbow Port, once stood. The remaining part of the Royal Mile, the Canongate, was a separate burgh for over 700 years, taking its name from the canons (priests) of Holyrood Abbey. As it was near the Palace of Holyroodhouse, the area developed as the court quarter and many fine residences for aristocratic families were built there. One of these, Queensberry House, now forms part of the Scottish Parliament building. Queensberry House was bought in 1686 by the father of the 2nd Duke of Queensberry, whose eldest son, the mad Lord James Douglas, escaped from confinement one night in 1701 and murdered a kitchen-boy – the very night that his father was signing the Act of Union that dissolved the Scots Parliament and put Scotland under English rule. You can find out more about Edinburgh's grisly past on the guided tours that leave from the Royal Mile. See for example Mercat Tours, Witchery Tours and Mary King's Close.

In the eighteenth century, Boyd's Entry was the site of James Boyd’s Inn, which received a famous visitor, whose stay is commemorated in a plaque on the wall: ‘Boyd’s Inn, at which Dr Samuel Johnson arrived in Edinburgh, 14th August, 1773 on his memorable tour of the Hebrides.’

The apartment is approximately 5-10 minutes' walk from both the Airport Express Bus Terminus and the main railway station: Edinburgh Waverley Station. There is also a tram service from Edinburgh Airport to the city centre. We will send you detailed directions before your arrival.

For those arriving by car, there is metered parking near to St Mary's Street, though the maximum parking period is 2 hours. Parking on meters and single-yellow lines is free from 6.30pm to 7.30am; please check on-street signage for exact times of parking restrictions; parking is forbidden at all times on double-yellow lines. St John's Hill Car Park is on the next corner at Holyrood Road. Click on this website  and you can search for “Edinburgh St Johns Hill”.

The apartment is on the ground floor and there are a few steps within the apartment.