This unique property has a double bedroom and large open-plan living/dining/kitchen space, with two double sofabeds in the living area. The shower room is en suite to the bedroom. Private offstreet parking space is usually available for one private car (on request), and a garden with table and chairs. Central location, within walking distance or a short bus ride from the major tourist attractions, Festival venues, shops, nightlife and transport connections.

The living space with sofas and wood-burning stove 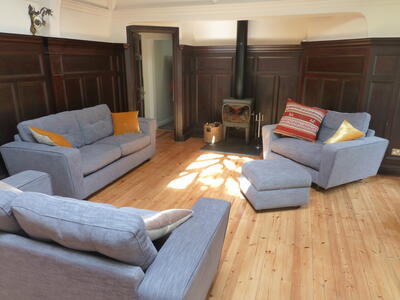 The sitting area has two sofabeds (one a three-seater, the other a two-seater), which convert into double beds, with sprung mattresses. The bedroom has a standard-size double bed, is carpeted and has a window and door to the garden. There is an en-suite shower room; the shower room is accessible only from the bedroom, not from the main living space. There is a wood-burning stove. This property is not suitable for children under 2-years-old but older children are welcome.

The Pavilion is accessed via a tiled entrance vestibule from the rear garden of the owners' adjacent house. Guests have use of the garden, including a Weber barbeque and garden furniture. (The garden is used by the owners' dogs, both of whom are very sweet and well behaved, and can be shut in if guests prefer not to associate with them.)

The property is located in Newington, just south of the city and minutes walk from Holyrood Park and the Commonwealth Pool. The Meadows is a short walk, and a slightly longer walk takes you to bustling Tollcross and Bruntsfield, where there are cafes and shops aplenty. Summerhall, the arts venue that was converted from the old veterinary school, is a couple of blocks away. Newington itself has a range of restaurants, cafes, pubs and speciality shops. The Salisbury Arms has a lovely beer garden and renowned food; Finnan to Go does the best fish and chips for miles, and a walk towards town takes you past the Queen's Hall and the Festival Theatre, where there are always a range of great performances.

This property is an ideal base from which to explore the city. It lies on a major bus route and you can hop on a bus into town, which in 10 or 15 minutes will have you in the heart of the city. We recommend that you buy day tickets (buy one on your first bus of the day) so that you can take as many buses as you like over the course of the day. Or if you want to experience more of the city, you can easily walk to the Royal Mile and city centre through the streets of the Southside or via the Meadows, an area of open parkland. The Meadows were originally under water: the Burgh Loch, which was drained in 1740, was one of Edinburgh’s main water supplies. The area is now one of the city’s biggest green spaces, ideal for jogging, walking and other sports. There are public tennis courts, a children’s playpark and Bruntsfield Links Golf Course, one of the oldest courses in the world, where you can have a round of pitch-and-putt. Minto Street is also only a few minutes' walk away from the extensive and rugged open space of Holyrood Park and Arthur's Seat, which are ideal for an inner city picnic or ramble. You can access Holyrood Park and Arthur's Seat via the beautiful Blacket Conservation Area.

On the way in to the city centre, Minto Street leads into Newington Road, which has a great choice of shops and eating and drinking places, and the choice increases as you approach the Royal Mile. Nearby Causewayside has a number of antique shops. The arts centre Summerhall, which has become one of the main focuses of the Edinburgh Festival Fringe, is a few blocks away, as is a satellite of the National Library of Scotland, which houses the library's map collection.

The apartment is about a 15-20 minute bus journey or a 35-40-minute walk from the tram stop "Princes Street" (which runs directly from/to Edinburgh Airport) and a 35-40-minute walk from the main railway station: Edinburgh Waverley Station. Taxis can be hailed throughout the city centre, and there are bus stops nearby for buses to the city centre. We will send you detailed directions before your arrival.

For those arriving by car, there is usually parking available for one private car at The Pavilion (parking is on request so please let us know in advance is you'd like to request it), and there is metered on-street parking on surrounding streets (please check signs and times of parking carefully). This apartment is close to the city centre. (Most of our other city centre / Old Town properties are in areas where you have to pay for parking either in an NCP car park or by using an on-street parking meter.)