Contemporary living right beside the Royal Mile and Holyrood Park

A bright, stylish one-bedroom apartment (sleeps 1-4) in an attractive and modern apartment building beside the historic Royal Mile with The Palace of Holyrood House and the Scottish Parliament a few steps away. It's located right beside the green expanse of Holyrood Park. Within easy walking distance of the major tourist attractions, festival venues, shops, nightlife and transport connections.

The living-room with dining area 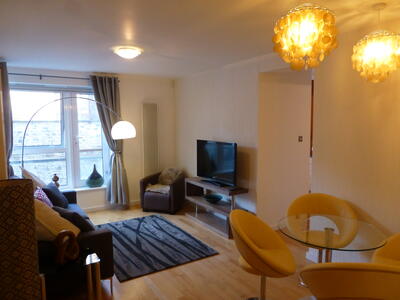 The living room is comfortable and has a dining area with table and chairs. There is a TV and free wifi internet access for your laptop or mobile devices. There is laminate flooring throughout.  The sofa converts in to a double sofabed.

The modern kitchen is well provided with crockery, cutlery, glasses and kitchenware, as well as a washing machine (a clothes horse is provided for drying clothes), fridge, cooker and microwave. There's a washing machine and tumble dryer for guests' use.

The double bedroom is attractively furnished and is quietly located at the rear of the property. The bathroom has a wash-hand basin and bathtub with shower over.

The apartment has full central heating; the price of electricity and local taxes is included. For the comfort of future guests, the apartment is non-smoking and pets are not allowed.

Guests also have free access to the gym, pool, sauna and steam room of the MacDonald Hotel, which is next door to the apartment.

The Palace of Holyrood House is a few steps away 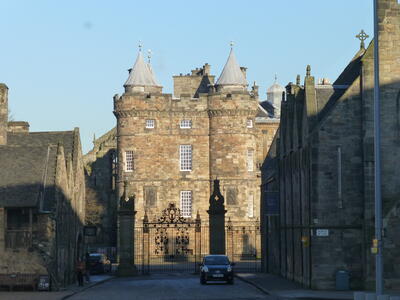 This apartment is situated on Holyrood Road beside the Royal Mile in the heart of Edinburgh's historic Old Town, and just a few steps away from the Palace of Holyroodhouse and the Parliament. The Royal Mile, the backbone of medieval Edinburgh, connects the Palace of Holyroodhouse at one end with Edinburgh Castle at the top. Edinburgh's main visitor attractions are on your doorstep and the neighbourhood is full of attractive independent shops and restaurants, bars and cafés to suit all budgets, from cheap and cheerful pizzerias to fine dining establishments.

The nearby Canongate area of the Royal Mile was a separate burgh from Edinburgh for over 700 years, taking its name from the canons (priests) of Holyrood Abbey. Because it was near the Palace of Holyroodhouse, the area developed as the court quarter and many fine residences for aristocratic families were built there. One of these, Queensberry House, now forms part of the Scottish Parliament building. Queensberry House was bought in 1686 by the father of the 2nd Duke of Queensberry, whose eldest son, the mad Lord James Douglas, escaped from confinement one night in 1701 and murdered a kitchen-boy – the very night that his father was signing the Act of Union that dissolved the Scots Parliament and put Scotland under English rule. You can find out more about Edinburgh's grisly past on the guided tours that leave from the Royal Mile. See for example Mercat Tours, Witchery Tours and The Real Mary King's Close.

The property has a shared courtyard, but if that isn't enough for you, just across the road is the extensive and rugged open space of Holyrood Park. Within Holyrood Park are Salisbury Crags, Arthur's Seat and Whinney Hill: an excellent place for an inner city picnic or ramble. Opposite the building is the popular Our Dynamic Earth visitor centre and the headquarters of The Scotsman newspaper. The Hub (the official centre for the Edinburgh International Festival) and the Festival Fringe office are on the Royal Mile, and you can easily walk to many of the Festival venues. You are also ideally placed to enjoy the Christmas and Hogmanay/New Year festivities.

The Park apartments were designed by Campbell & Arnott Architects and presented in 2002 as exclusive housing arranged in a U-shape around a landscaped court, alongside the new Scottish Parliament buildings. The architects won the EAA Awards 2002 (Silver Medal Commendation) and a Saltire Award in 2002 with Teague Homes.

The apartment is approximately 15-20 minutes' walk from both the Airport Express Bus Terminus and the main railway station: Edinburgh Waverley Station. There is also a tram service from Edinburgh Airport to the city centre. Taxis can be hailed throughout the city centre. We will send you detailed directions before your arrival.

For those arriving by car, there is metered parking on Holyrood Road, though the maximum parking period is 2 hours. Parking on meters and single-yellow lines is free from 6.30pm to 7.30am; please check on-street signage for exact times of parking restrictions; parking is forbidden at all times on double-yellow lines. St John's Hill Car Park is on the next corner at Holyrood Road. Click on this website  and you can search for “Edinburgh St Johns Hill”.