A bright, centrally located one-bedroom apartment (sleeps 1–4) off the Royal Mile, with spectacular views of the city and surrounding area from a rooftop terrace and within easy walking distance of the major tourist attractions, festival venues, shops, nightlife and transport connections. 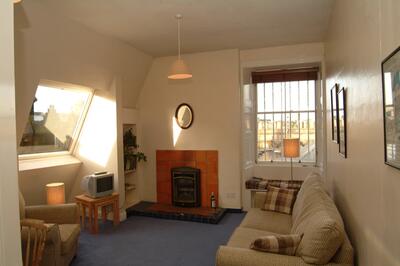 This holiday home is a bright one-bedroom apartment on the top floor (fourth floor, no lift) of an architecturally significant building (B-listed) with stunning views situated off the historic Royal Mile in the centre of Edinburgh. The apartment is within easy walking distance of the major tourist attractions, festival venues, shops, nightlife and transport connections. The apartment is light and airy and has views over the city rooftops. Unique to this building is the shared roof terrace, which is accessed from the top of the entrance stairway and which has spectacular panoramic views over the city, sea and hills.

With windows on two sides, the spacious living room is full of light and has attractive views of the Old Town, North Bridge and Calton Hill. There is a coal-effect gas fire and a comfortable dining area. The three-seater sofa converts in to a double sofabed, and there is a comfortable armchair and window seat. A TV, a selection of books and wall-to-wall carpeting complete the home comforts.

The modern kitchen is well provided with crockery, cutlery, glasses and kitchenware, as well as a washing machine, fridge, freezer, cooker and microwave. A pulley suspended from the hall ceiling is a traditional way of drying clothes.

The double bedroom is fully carpeted and attractively furnished. The bathroom is partly wood panelled and has a wash-hand basin and bathtub with shower over.

The apartment has gas central heating and double glazing. The price of gas, electricity and local taxes is included. For the comfort of future guests, the apartment is non-smoking and pets are not allowed. 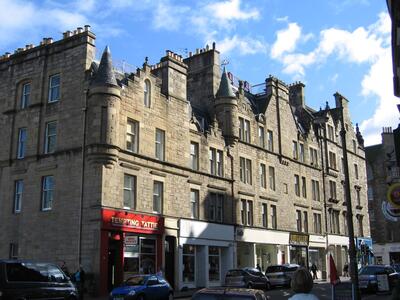 All tenement apartments in Edinburgh are accessed by shared stairways, which tend to be functional more than luxurious, although the entry-phone system ensures the security of the stairway. Because the building dates from the 19th century, there is no lift and thus no wheelchair access. The apartment is on the fourth floor.