This bright apartment has a bedroom with double bed and a living-room with daybed (suitable for 1-2 adults or 1-2 adults plus 1 child). It's located in the vibrant Marchmont area, close to the University of Edinburgh campuses, the Meadows park and many pubs and restaurants. The shared garden is a quiet, secluded suntrap. 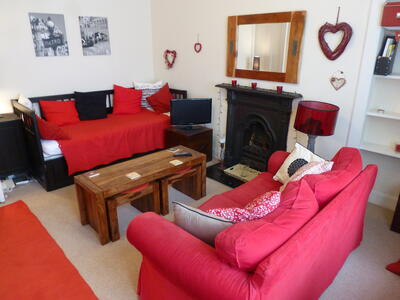 Sciennes House Place apartment is a one-bedroom apartment in a traditional Edinburgh tenement building in Marchmont, only a 10-minute bus ride or 15-minute walk from the city centre. The University of Edinburgh campuses are just a few minutes' walk away, as is the Meadows park and many pubs and restaurants.

There is a small well-equipped kitchen, a bedroom with double bed and a living room with daybed. The apartment is suitable for 1-2 adults or 1-2 adults plus 1 child. The bathroom has a bathtub with shower over, and there is a separate WC. Free wifi internet access is included. Use of bedlinen and towels is included in the price. There is a shared garden available for guests, which is a quiet, secluded suntrap.

The apartment has gas central heating. The price of heating, electricity and local taxes is included. For the comfort of future guests, the apartment is non-smoking and pets are not allowed. 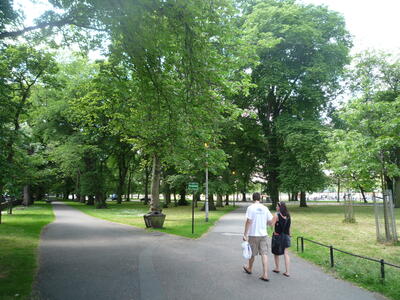 This apartment is an ideal base from which to explore the city. The apartment is close to two major bus routes and you can hop on a bus into town, which in 10 or 15 minutes will have you in the heart of the city. We recommend that you buy day tickets (buy one on your first bus of the day) so that you can take as many buses as you like over the course of the day. Or if you want to experience more of the city, you can easily walk to town through the University via Causewayside and Buccleuch Street, or via the Meadows, an area of open parkland. The Meadows were originally under water: the Burgh Loch, which was drained in 1740, was one of Edinburgh’s main water supplies. The area is now one of the city’s biggest green spaces, ideal for jogging, walking and other sports. There are public tennis courts, a children’s playpark and Bruntsfield Links Golf Course, one of the oldest courses in the world, where you can have a round of pitch-and-putt.

Sciennes (pronounced sheens) gets its name from Sciennes Hill House (built in 1741, but long since incorporated into a tenement building), which was the home of Robert Biggar, who was ruined financially by investing in the Darien Scheme. Nearby Causewayside was historically the main road south form Edinburgh, and the name derives from the old Scots word causey, meaning a paved road. The street has many eating and drinking places, along with interesting independent specialist shops, including a number of antique shops. The arts centre Summerhall is just up the road and in the other direction is a satellite of the National Library of Scotland. Just along the road the adjoining area of Marchmont has lots of independent shops and eating and drinking places. Marchmont is the home turf of Detective Inspector John Rebus, Ian Rankin's fictional detective. The former James Gillespie's High School for Girls on Warrender Park Crescent was the alma mater of Muriel Spark, and inspired the lead character (and school) in her book, The Prime of Miss Jean Brodie.

The apartment is about a 25-30-minute walk from the tram stop "Princes Street" (which runs directly from/to Edinburgh Airport) and a 25-minute walk from the main railway station: Edinburgh Waverley Station. Taxis can be hailed throughout the city centre, and there are bus stops nearby for buses to the city centre. We will send you detailed directions before your arrival.

There is metered parking on Sciennes House Place and surrounding streets, though the maximum parking period is 2 hours. Parking on meters and single-yellow lines is free from in the evenings; please check on-street signage for exact times of parking restrictions (please check signs and times carefully); parking is forbidden at all times on double-yellow lines. Edinburgh Quartermile Car Park is a 10-minute walk away from the apartment. The car park is open 24 hours a day, 7 days a week. Click on this website  and you can search for “Edinburgh Quartermile”.