A very comfortable, centrally located one-bedroom apartment (sleeps 1–4) off the Royal Mile, with pleasant outlook onto historic buildings and within easy walking distance of the major tourist attractions, festival venues, shops, nightlife and transport connections. From the rooftop terrace, there are spectacular views of the city and surrounding area. 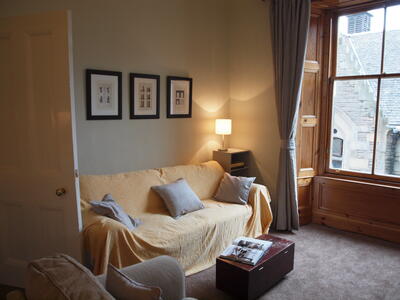 This property is a bright centrally located one-bedroom apartment on the first floor of an architecturally significant building (B-listed), off the historic Royal Mile in the centre of Edinburgh and within easy walking distance of the major tourist attractions, festival venues, shops, nightlife and transport connections.

The apartment is light and airy and looks out to an historic church. The spacious living room has two sofas, one of which converts in to a double sofabed. There is also a dining table with seating for four. The modern kitchen is well provided with crockery, cutlery, glasses and kitchenware, as well as a washing machine, fridge, freezer, hob, oven and microwave. The double bedroom is fully carpeted and attractively furnished. The shower-room is partly wood panelled and has a wash-hand basin and walk-in shower (no bathtub). Unique to this building is the shared roof terrace, which is accessed from the top of the entrance stairway and which has spectacular panoramic views over the city, sea and hills. 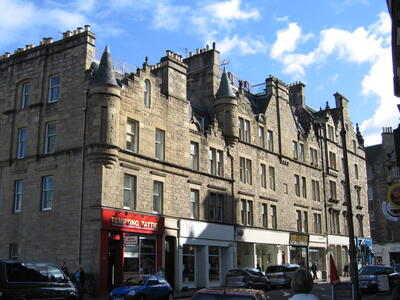 All tenement apartments in Edinburgh are accessed by shared stairways, which tend to be functional more than luxurious, although the entry-phone system ensures the security of the stairway. Because the building dates from the 19th century, there is no lift and thus no wheelchair access. The apartment is on the first floor.