Georgian splendour in central location in the West End

Centrally located two-bedroom apartment (sleeps 1–4) in a quiet crescent in the West End, just a few minutes' walk from Princes Street and the shops and sights of the city centre and Old Town. This apartment is very close to the tram stop for Edinburgh airport. This is a peaceful location in the heart of Edinburgh's spectacular West End architecture. The apartment has a leafy outlook across to the central private gardens of Drumsheugh. 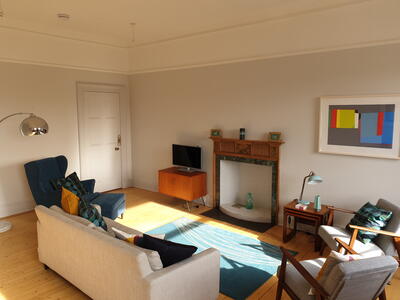 This holiday home is a quiet and secluded two-bedroom apartment on the third (top) floor of an architecturally significant building. The street is one of the grandest crescents in the West End. The apartment is within easy walking distance of the major tourist attractions, festival venues, shops, nightlife and transport connections. The tram stop for Edinburgh Airport is a short walk away at the West End/Princes Street tram stop.

There is a large living room with a large sofa and easy chairs, and the two windows look out over the street to the gardens. The kitchen is well provided with crockery, cutlery, glasses and kitchenware and has a large dining table. The kitchen/dining-room has great open views across the city to the Firth of Forth river estuary. Bedroom one has a king-size double bed with views to the leafy gardens. At the back of the apartment is the second bedroom with two single beds, and this also has open views across the city to the river. The bathroom has a bathtub with shower over. The apartment has gas central heating and the price of electricity and local taxes is included. For the comfort of future guests, the apartment is non-smoking and pets are not allowed. 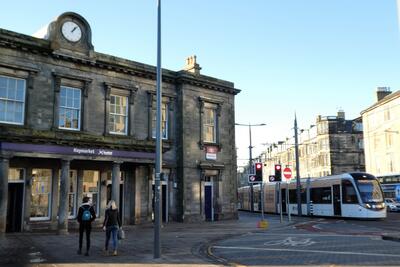 Drumsheugh (pronounced drum-shooch, with the ch as in the Scots pronunciation of loch) Gardens is situated in Edinburgh's leafy West End. The West End has an array of small independent shops, and Princes Street, the New Town and the Old Town are all just a short walk away. It is well placed for the main galleries and museums and is a 5-minute walk from Edinburgh Haymarket railway station and tram stop. It’s a short and pleasant walk to the Royal Mile and the Castle via Princes Street Gardens, Lothian Road and the Grassmarket, or the Mound.

Drumsheugh Gardens takes its name from Drumsheugh House, home of the Earl of Murray, which stood nearby in what is now Randolph Crescent and which was demolished in 1822. It’s a quiet residential street in the area known as the West End, which lies on the western fringe of the New Town, and is only a few minutes’ walk from Princes Street and George Street, with their shops and eating and drinking places. The New Town was laid out in the early eighteenth century and encompasses the geometric streets between Great King Street to the north and Princes Street to the south and Broughton Street to the east and Charlotte Square to the west; it is a complete contrast to the medieval irregularity of the Old Town. The New Town is mainly residential but there are lots of independent shops, galleries, bars and restaurants to discover, especially around Dundas Street, Thistle Street and Broughton Street. Charming William Street, between Drumsheugh Gardens and Shandwick Place, is well known for its specialist shops and popular pubs, and the adjoining area of Stockbridge is a pretty neighbourhood with a boho atmosphere and a unique range of one-off shops, bars, cafes and restaurants and a weekly market every Sunday. The Scottish National Gallery of Modern Art is a few minutes’ walk away and houses the outstanding national collection of modern and contemporary art, from the beginning of the twentieth century and post-war, including Matisse, Picasso, Francis Bacon, David Hockney, Andy Warhol, Lucian Freud, Antony Gormley, Gilbert & George, Damien Hirst and Tracey Emin. The other National Galleries are also very close; these galleries are the Scottish National Gallery, which holds the national collection of fine art from the early Renaissance to the end of the nineteenth century, including masterpieces from Raphael, El Greco, Velázquez, Rubens, Van Gogh, Monet, Cézanne, Degas and Gauguin, and the National Portrait Gallery, which tells the story of Scotland and her people through a wealth of imagery including portraits of famous historical figures such as Mary, Queen of Scots, Prince Charles Edward Stuart and Robert Burns, through to more recent pioneers in science, sport and the arts. The Water of Leith with its sculptures by Anthony Gormley is a pleasant place to walk.

For those arriving by car, there is metered parking on Drumsheugh Gardens and surrounding streets, though the maximum parking period is 2 hours. Parking on meters and single-yellow lines is free from 6.30pm to 7.30am; please check on-street signage for exact times of parking restrictions; parking is forbidden at all times on double-yellow lines.

All tenement apartments in Edinburgh are accessed by shared stairways, which tend to be functional more than luxurious, although the entry-phone system ensures the security of the stairway.